I was really intrigued by reading this application's description. "Y2K proofing"? That's almost a quarter of a century old subject. Who cares about that anymore? However, notes say that Cracklock also protects your computer from the Y10K bug (giggles) and also against the so called "sadistic 30 day virus", of which I've never heard in my life - pardon my ignorance. However, what caught my attention was its ability to circumvent time restriction of trial software.

"Great!", I said. "This could really save me some shekels". My enthusiasm was ignoring the fact that we're no longer in the age of Windows XP. Hence date verification is now generally done over the Internet and not locally. Nevertheless, I did try to freeze time on a very special app trial of which title I will not disclose. I also blocked it from accessing the net, using Windows Firewall. Unfortunately, I could not verify if that works, because I can no longer start the app in question. Ah well... 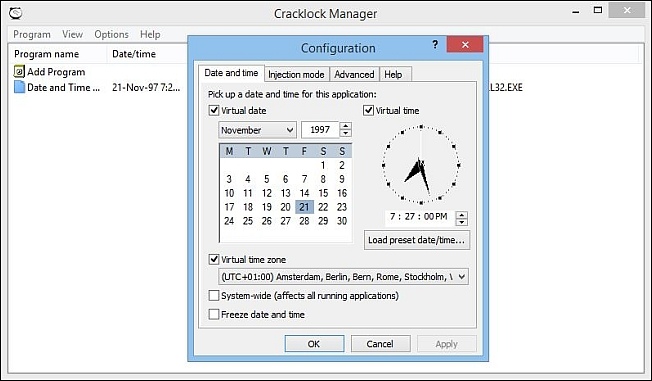 You can configure Cracklock, using Cracklock Manager which can be accessed from the properties menu of an executable file (on the old Windows) or otherwise from the installation folder. The manager displays a list of programs that have been influenced by Cracklock. There you can add, edit or remove apps. Programs can be configured to run on virtual time and/or date, which can also be frozen in order to avoid trials from expiring or the switch to year 10.000 AD from ruining your computer...

Programs can be influenced in two modes. Cracklock can "inject" the instructions at run-time, or modify the executable file permanently. I opted for the second variant and that probably what screwed up my app.

Cracklock is suposed to be a solution against running time. However, 2008 is long gone, technology has changed, and this software appears to be a relic of the past. It might be useful if you're still running Windows XP (the last good version, FYI) and want to keep running trial software from that same age.

RELATED PROGRAMS
Our Recommendations
Sophos Update    FREE
Sophos Update is a utility that enables the automatic updates of IDE for Sophos Anti-Virus. The software was develloped for Windows 2000/XP and Windows 98/ME. Click here to display frequently asked questions. To use this...
Download